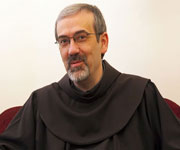 In a rare official complaint from a Vatican senior official in Jerusalem, Fr.Pierbattista Pizzaballa Custodian of the Holy Land said in a Friday statement that Israel has failed to respond adequately to frequent discrimination against Christians. "The time has come for the authorities to act to put an end to this senseless violence and to ensure a 'teaching of respect' in schools for all those who call this land home," said the statement, which appeared in La Stampa and was signed by several other Vatican officials.

The statement follows an incident of vandalism in the town of Latroun, which is just West of Jerusalem and home to a Trappist monastery. The monastery's doors were set aflame on Tuesday, and the phrase "Jesus was a monkey" was scrawled in orange spray paint on the white stone walls. According to Most Reverend Fr.Pierbattista Pizzaballa Custodian of the Holy Land such discrimination is fairly common in Israel. "When I came to the country, I was told that I should know that if I walk around with a frock in the city, people would spit on me, and I shouldn't be offended, it's normal," he said in an interview with Haaretz on Friday.


The Israeli Government has called for religious tolerance, but Pizzaballa maintains that security officials are slow to prosecute Jews who target Christians. But he also recognizes that progress can only be made if both sides cooperate. "Most Israelis don't know a thing about the Christian presence in the country," he said. "Both we and the Israeli public are to blame for this. We need to talk more."