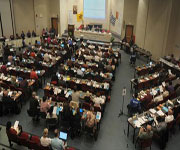 The World Council of Churches has concluded its Central Committee meeting with statements of concern on several countries. The Central Committee called for a commission of inquiry into the killing of miners at the Lonmin mine in South Africa and urged civil authorities to prosecute those directly responsible for the deaths. The Central Committee said that the WCC "stands in solidarity with the churches of South Africa as they seek to minister and bring healing to the families that lost their loved ones in the massacre and to all who have been affected by this terrible situation". A statement on the ongoing financial and economic crisis placed particular emphasis on Greece, where the Central Committee was meeting.

The church, it said, was called upon "to defend the dignity of all people, as made in the image of God". "The crisis is spiritual and moral, as well as economic," the Central Committee said. It supported the proposal of a financial transaction tax and called upon the churches of Europe to advocate "common European solutions" to the financial and social crisis. European churches should "mobilise and support one another for the immediate relief and assistance of the weakest members of our society".


In Pakistan, where a Christian girl accused of blasphemy has made international headlines, the Government is being urged to take "immediate action" to prevent the abduction, forced conversion to Islam and forced marriage of women from minority religious communities. Pakistan is predominantly Muslim and human rights groups say that religious minorities are being discriminated against.


The Central Committee called for "adequate protection mechanisms for all religious minorities in the country". A statement on Syria appealed to all parties in the conflict to engage in dialogue "as the only solution ... to safeguard the unity and pluralistic nature of historic Syria". The Committee also expressed opposition to outside military intervention and said that the "ability and responsibility" of the Syrian people to find solutions to the crisis should be respected.