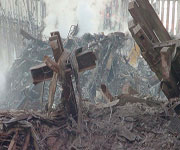 The United States is on heightened alert every September 11. This time, the attacks are coming from atheists and the target is the cross. The American Atheists Foundation filed a lawsuit regarding the 17-foot, relic cross found amid the rubble at the World Trade Center. The lawsuit complains of unequal representation. The cross was dedicated to the World Trade Center Memorial. After it was found amongst the debris, workers and volunteers saw it as a symbol of hope. The cross brought great comfort to those who had lost loved ones in the terrorist attack.

David Silverman, President of American Atheists Foundation contends that atheists are experiencing horrible physical reactions after seeing the rubble cross, such as "inter alia, dyspepsia, symptoms of depression, headaches, anxiety, and mental pain and anguish." American Atheists Foundation claim that the cross makes them "feel officially excluded from the ranks of citizens who were directly injured by the 9/11 attack."


"Atheist groups would like to see a total collapse of the free exercise of religion in America," says Mat Staver, founder and chairman of Liberty Counsel. "The cross is a symbol of hope amidst the total destruction at ground zero. The lawsuit is further evidence of the war on Christianity in America. The 9/11 cross survived the terrorist attack by Muslim extremists, and it will survive the cultural attack by radical secularists."