Archbishop of Trivandrum named as Cardinal by Pope Benedict XVI 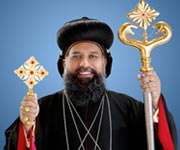 Archbishop of Trivandrum Siro-Malankaresi Church, Baselios Cleemis Thottunkal and five others were named as new cardinals by Pope Benedict XVI. The announcement, made by Pope during his weekly general audience in Rome, came as a major recognition to the hard work and devotion by the Kerala-based Archbishop. According to information, the other new cardinals will be the American James Michael Harvey, Lebanon's Bechara Boutros Rahi, Manila's Luis Antonio Tagle, Nigeria's John Onaiyekan and Colombia's Ruben Salazar Gomez. After the consistory ceremony on November 24, they would join the Vatican's College of Cardinals who will elect the new pope.


Isaac Thottunkal was ordained a priest on June 11, 1986. He studied for the Master of Theology in Dharmaram College, Bangalore where he attended from 1986 to 1989. Thottunkal took his Doctorate in Ecumenical Theology from Pontifical University of St Thomas Aquinas, Rome in 1997. On his return from Rome he became the Proto Syncellus of the Eparchy of Bathery.


Pope John Paul II appointed him on June 18, 2001 Auxiliary Bishop of Thiruvananthapuram and Apostolic Visitor for the faithful residing in North America and Europe. He was ordained bishop on August 15, 2001, assuming the name Isaac Mar Cleemis. The Holy See appointed Cleemis as sixth Bishop of the Eparchy of Thiruvalla on, September 11, 2003.


Cleemis was installed as the first Metropolitan Archbishop of the Thiruvalla Archeparchy on June 10, 2006. Mar Cleemis was elected the Second Major Archbishop and Catholicos of the Syro-Malankara Catholic Church on February 09, 2007. Baselios Cleemis was enthroned the Second Major Archbishop-Catholicos of the Syro-Malankara Catholic Church on March 05, 2007 at St Mary's Cathedral, Pattom, Trivandrum.