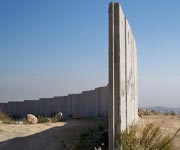 The Assembly of Catholic Ordinaries in the Holy Land (ACOHL) has slammed Israel's plans to build a separation wall in the Cremisan Valley to protect itself from terrorist attacks. In a press release, Catholic ordinaries deny claims that the Vatican and Israeli authorities had reached an agreement allowing the construction of the wall, illegal according to a ruling by the International Court of Justice in 2004. Unmoved by the sensitive situation, some foreign newspapers have recently accused the Salesians of the Cremisan convent of collusion with the Israeli Government.

In fact, the wall does not spare the two Salesian communities, the Salesian Sisters Convent and the Salesian Monastery, which provide local villages with educational and charitable services. A local school run by the Sisters has about 450 pupils. If the area is divided, the latter will have to go to a place that will look like a military camp surrounded by checkpoints.


Twenty-two religious leaders signed the statement, including Mgr Fouad Twal, Latin patriarch of Jerusalem and Fr Pierbattista Pizzaballa, Custodian of the Holy Land. Both warn that the lives of 58 Christian families living in Beit Jala are now threatened. They depend for their livelihood on 300 hectares of land from which they will be cut off. The community will lose one of the last large agricultural and recreational areas with sources of water essential for farming.


Located a few kilometres from Bethlehem, the Cremisan Valley is famous for its wine production and olive trees, a verdant belt for neighbouring villages, already stressed by overpopulation and water shortages. According to the bishops, dividing the area would make it impossible for local Palestinians to remain, especially since many are already unemployed. The wall will also contribute to the Christian exodus from the Holy Land.