Christians defend believers of other faiths in UK 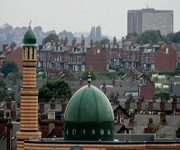 Most Christians in the United Kingdom would defend people of different faiths, a survey by Christian Research has found. More than eight out of 10 (84%) of the 2,100 committed Christians surveyed said they would defend believers of other faiths from anti-religious sentiment even though they disagreed with their basis of faith. The survey follows the furore over a film mocking Islam that triggered violent protests around the world.

One in three participants in the survey (34%) said they did not agree that the film, Innocence of Muslims, should have been allowed to be made public. Over two thirds (67%) agreed that press self-regulation was necessary in Britain to safeguard the right to express opinion free from censorship or repression. The research is being presented at the Christian Resources Exhibition North, taking place in Manchester on Wednesday and Thursday. "Given headlines which sometimes describe Christians as 'Bible-bashing bigots', you'd be forgiven for thinking they're an out-of-touch, backward-looking bunch," said Christian Research's Rob Powys-Smith.


"In fact, respondents showed they welcome thought-provoking opposition that challenge their beliefs, more than two in three (69 per cent) agreeing that 'strong anti-Christian opinion provided opportunities to exchange ideas'." The survey found strong support for freedom of expression among Christians. Seventy-four per cent agreed that freedom of expression should not be curbed even if it offends those with deeply-held religious convictions, while a similar number (76%) said that the great British virtue of tolerance was considered an admirable value in the face of aggressive anti-religious opposition. "The implication here is that restraint requires effort and should not be confused with apathy or silence," said Powys-Smith.


Some of those surveyed (40%) were unhappy with the portrayal of the Christian faith in the media or popular culture, agreeing that this largely boiled down to "lazy caricatures" or stereotypes. Most (85%) agreed that freedom of expression must accommodate all views, except where extreme opinions are deemed liable to cause discrimination, hatred or intolerance. Two in five expressed opposition to common law blasphemy or blasphemous libel - legally enshrined in Northern Ireland - being reinstated to cover all religions.


More than half (57%) felt it was possible to demean, mock or insult God without offending Christians, although 61% said they felt Christians in the UK were too tolerant of anti-Christian expression. "Far from being on the defensive, it appears that most Christians welcome the opportunity to wrestle over key issues and are prepared to stand alongside believers of other faiths who are less familiar with being lampooned or more sensitive to criticism," concluded Powys-Smith.