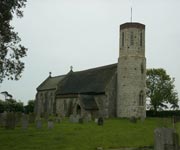 A rescued Norfolk church is among the winners of this year's English Heritage Angel Awards. St Mary's, West Somerton, has a thatched roof and medieval round tower, as well as wall paintings from the 14th century. Pauline Burkitt and Simon Pleasley oversaw a major restoration project to replace the thatched roof, restore the plastering and install new drains to keep the magnificent wall paintings dry. Mr Pleasley said: "Because we are church wardens we are responsible for the fabric of the church. People don't realise that.

St Mary's, West Somerton is a civil parish in the English County of Norfolk. It comprises the twin villages of East Somerton and West Somerton and is situated some 14 km (8.7 mi) North of the town of Great Yarmouth, 35 km North-East of the city of Norwich and 2 km from the sea. The civil parish has an area of 8.25 km2. The church of West Somerton St Mary is one of 124 existing round-tower churches in Norfolk.


The awards were founded by Sir Andrew Lloyd Webber last year to celebrate the efforts of local people in rescuing their at-risk heritage. The winners of this year's awards were chosen from 16 finalists and announced at a ceremony this morning at the Palace Theatre in London.


The judging panel included the Bishop of London, Dr Richard Chartres and historian Bettany Hughes. Mr Lloyd Webber said: "I am delighted for all the winners of this year's Angel Awards who were chosen from a very strong shortlist. "I think it is hugely important to publicly recognise the efforts of those rescuing heritage sites in order to show our appreciation for their work and encourage even more people across the country to do the same."


Dr Simon Thurley said: "Once again we have been dazzled by the energy, invention, commitment and public spiritedness of thousands of people determined to save their precious heritage. While the angel awards were presented to five people, we are all winners, as we can now enjoy the historic places they have saved for the future."