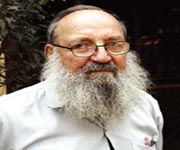 A Catholic priest was among 61 foreign nationals rewarded by the Bangladesh Government yesterday for their outstanding contribution to the birth of Bangladesh in 1971. Italian Xaverian missioner Father Marino Rigon was conferred a Bangladesh Liberation War Honour and Friends of Liberation War Honour by President Zillur Rahman and Prime Minister Sheikh Hasina at a ceremony in Dhaka.


Father Marino Rigon, who has worked in Bangladesh for over 40 years helped war refugees and freedom fighters in 1971 in the parish of Baniarchar Catholic Church, Gopalgonj. A Hindu freedom fighter said: "Fr. Rigon saved hundreds. He provided food and shelter to refugees, also offered treatment to injured freedom fighters. He is a foreigner and his life was under threat, but his contribution to this country is incomparable."


He was one of four Catholic priests – American Holy Cross Fathers Richard W Timm and Eugene Homrich, who are still alive and martyred priests Father Mario Veronesi and Father William P Evans – to be awarded this year. "As long as Bangladesh lives, her sky, air and soil will remain grateful for your contributions. You have consciously paid heed to the cry of humanity," Sheikh Hasina Prime Minister of Bangladesh said in her address.