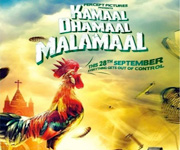 Catholic groups in Mumbai have withdrawn their protest against the film Kamaal Dhamaal Malamaal which they alleged portrayed the clergy and community in bad light. The representatives of The Catholic Secular Forum, Association of Concerned Catholics (AOCC), Catholic Residents Organization for Social Services (CROSS), Maharashtra Christian Youth Forum (MCYF) and Catholics for Preservation of Faith (CPF), viewed the Hindi comedy on the first day to assure themselves that the offensive scenes were not being shown.

Bishop Agnelo Gracias, Auxiliary Bishop, Archdiocese of Mumbai said, he was "happy that the objectionable scenes have been deleted". "Every religion should be treated with the respect it deserves. I hope the Censor Board will maintain caution in future while granting Certification to the movies," he said. Some of the scenes removed after protests include the priest in a song and dance sequence with a pop group; the priest with a garland of lottery tickets, mouthing objectionable dialogues; Catholic goons against the church backdrop with currency notes on their bodies; among others.


Agnelo Fernandes, MCYF president thanked the Union Minister of Information & Broadcasting, Ambika Soni, for her timely intervention. Joe Sodder of AOCC said the community groups had decided to "unitedly fight against misrepresentation of all religions" in films.


Earlier, a delegation met with representatives of the Indian Motion Picture Producers Association (IMPPA), Film Makers Combine (FMC) and Western India Film Producers Association (WIFPA), who in writing assured them that an advisory would be sent out to the film fraternity, cautioning the industry of stringent action, in case religious sentiments of any community was hurt. The Priyadarshan-directed movie stars Shreyas Talpade as the protagonist. Released on Friday, it ranks amongst one of the lowest openers of the year.


Joseph Dias, the CSF general secretary pointed out that movie where Christians and the faith is being grossly and vulgarly portrayed, "trivializes the faith and stereotypes the community as drunkards and criminals, besides painting the clergy in bad light". "Our women are shown as those of cheap virtue and loose morals. This image is then used by fundamentalists, who persecute and target us," he said.