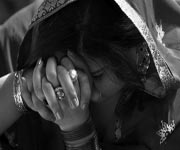 A Christian girl who had been abducted from Sukkur in Sindh was recently remanded to her alleged kidnapper husband by the Sindh High Court after rejecting all appeals by her lawyer to send her home with her father. Justice Naamatullah Phulpoto rejected the requests of Rebecca's father, Younis Masih and his lawyer, Mukesh Kumar to return the girl home to Darul Aman. Instead, she was instructed to go home with her Muslim kidnapper turned husband, Manzar Daharand; Phulpoto then adjourned the case to early November.


Rebbecca, who remained silent during the court proceedings, was accompanied by the son of Mian Mithoo, a politically powerful member of the National Assembly of the ruling Pakistan People's Party who himself has been accused of kidnapping non-Muslim girls and arranging their marriages to servants and friends, according to the Pakistan Christian Post.


President of the Pakistan Christian Congress Nazir Bhatti has accused Pakistan People's Party leaders of being involved in the kidnapping and forceful conversion of Christian and Hindu girls to Islam. He said non-Muslim girls are being kidnapped by Pakistan People's Party members and then either forced to be sex-slaves of Islamic "feudal lords," or sold in marriage to wealthy Muslims in Sindh.