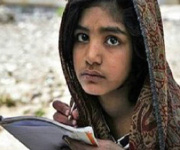 A mentally challenged Christian girl Rimsha Masih who was detained in Pakistan on charges of blasphemy against Islam has fled to Norway with family members, a Christian official involved in the operation confirmed. She arrived in the Scandinavian nation with support from the Norwegian Government said Farrukh H. Saif, Executive Director of the Pakistan-based Christian Aid and advocacy group World Vision In Progress (WVIP).

"Rimsha Masih is accompanied by her parents, two sisters and one brother," Saif explained in an interview with Worthy News. "European Pakistani Christians arranged her asylum", he added. Norway's Foreign Ministry and immigration authorities declined to comment, but Pakistan's prosecution office also said she had left for Norway.


Rimsha Masih was jailed August 17 in a prison near Islamabad after allegedly burning pages with verses of the Koran, viewed as holy book by Muslims. Her detention at Adiala Jail sparked an international outcry because of her age and a medical report confirming that she was mentally handicapped. Amid mounting pressure, Rimsha was eventually flown to safety on September 8 after an Islamabad court set the bail of one million Pakistani rupees ($10,600), Farrukh said.


"She was held at the Norwegian embassy as Norway was among six countries that wanted to help her and the family," he added. Aid groups in the United States, Italy and Canada also offered the teen and her family a home outside Pakistan, a family representative said. Eventually "some 20 days ago" she and her family were secretly flown to Norway, Saif explained.