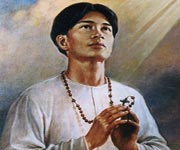 The Philippines has a new saint after Pope Benedict XVI yesterday canonized Pedro Calungsod, a 17-year-old catechist from Cebu who was martyred in Guam in 1672. Church bells rang while thousands in Cebu cheered, clapped and prayed as they watched a live three-hour television broadcast of the canonization at the Vatican. Calungsod was formally beatified on March 05, 2000 by Blessed Pope John Paul II and was officially canonized by Pope Benedict XVI at Saint Peter's Basilica in Vatican City on October 21, 2012.

"Filipino pilgrims occupied two thirds of [St Peter's] square and we cheered the loudest … after the Pope mentioned the Philippines," said Jesuit priest Jose Quilongquilong, rector of the Loyola House of Studies in Manila and who was in Rome for the canonization.


Father Quilongquilong, who hails from Cebu, said the mood in St. Peter's Square was festive. Pilgrims were introduced to seven new saints through tapestries unfurled from balconies on St. Peter's Basilica, with Calungsod's image hanging third from the right. "This was the second highest place of honor,'' said Ildebrando Leyson, vice-postulator for the Canonization Cause of Blessed Pedro Calungsod.


In the town of Ginatilan, where Calungsod was reported to have come from, people were elated, said parish priest Fr. Gerardo dela Victoria. After the listing of Calungsod's name in the canons of the Church, Archbishop Jose Palma of Cebu said Filipinos should work more to become "spiritual through good deeds." "May we show our gratitude in prayer and works of love," Archbishop Palma said in a text message from Rome. "Let us praise God for the gift of San Pedro Calungsod," the prelate said.


In Manila, the bishops' conference said the lack of "first-class relics" from Calungsod should not diminish his stature as a saint. What is important, it said, is that Calungsod's spirit "burns bright in Filipino's hearts." Calungsod has no relics because his body was allegedly thrown into the sea by his killers.


Church records show that Calungsod and Jesuit priest Diego Luis de San Vitores tried to baptize a baby in a village called Tumhon in Guam on April 2, 1672. The child's father angrily refused and, with the help of other natives, hacked them to death and threw their bodies into the ocean.