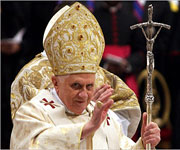 An event which has leant even greater meaning to today's celebration of World Missions Sunday and during the Synod for the New Evangelization. The Pope speaks of "a happy coincidence" and indicated in the words of the Gospel The Son of Man came to serve, and to give his life as a ransom for many (cf. Mk 10: 45), "how to be evangelizers, called to bear witness and to proclaim the Christian message, configuring ourselves to Christ and following his very path. This is true both for the mission ad Gentes and for the new evangelization in places with ancient Christian roots."


Those words of Jesus, the Pope says, "the Church listens again to these words of Jesus, spoken by the Lord during his journey to Jerusalem, where he was to accomplish the mystery of his passion, death and resurrection. They are words which enshrine the meaning of Christ's mission on earth, marked by his sacrifice, by his total self-giving". "These words - he adds - were the blueprint for living of the seven Blessed men and women that the Church solemnly enrols this morning in the glorious ranks of the saints. With heroic courage they spent their lives in total consecration to the Lord and in the generous service of their brethren. They are sons and daughters of the Church who chose the path of service following the Lord".


As did Pedro Calungsod was born around the year sixteen fifty-four, in the Visayas region of the Philippines. His love for Christ inspired him to train as a catechist with the Jesuit missionaries there. In sixteen sixty-eight, along with other young catechists, he accompanied Father Diego Luís de San Vitores to the Marianas Islands in order to evangelize the Chamorro people. Life there was hard and the missionaries also faced persecution arising from envy and slander. Pedro, however, displayed deep faith and charity and continued to catechize his many converts, giving witness to Christ by a life of purity and dedication to the Gospel. Uppermost was his desire to win souls for Christ, and this made him resolute in accepting martyrdom. He died on the second of April, sixteen seventy-two. Witnesses record that Pedro could have fled for safety but chose to stay at Father Diego's side. The priest was able to give Pedro absolution before he himself was killed. May the example and courageous witness of Pedro Calungsod inspire the dear people of the Philippines to announce the Kingdom bravely and to win souls for God!.


Benedict XVI also canonized the first Native American Saint Kateri Tekakwitha, born in today's New York state in sixteen fifty-six to a Mohawk father and a Christian Algonquin mother, and who died in Canada at the age of 24; the Italian Giovanni Battista Piamarta, a priest from Brescia and founder of the Congregation of the Holy Family of Nazareth and of the Congregation of the Sisters Humble Servants of the Lord, who lived between 1841 and 1913, the Frenchman Jacques Barthieu, professed Jesuit missionary in Madagascar where he worked for the promotion of the human population and where he was killed in 1896, the German Mother Marianne, born Barbara Cope, professed nun of the Congregation of the Sisters of the Third Order of St. Francis of Syracuse, better known as Mother Marianne of Molokai, the name of the leper colony where she devoted herself bravely to the sick, and died in 1918, the German Anna Schaffer, a lay woman, who lived in the late nineteenth and the first three decades of the twentieth century, who became an invalid in a domestic incident and who transformed her infirmity into an occasion to welcome and proclaim of the Gospel, the Spanish religious Maria del Carmen, foundress of the Sisters of the Immaculate Conception Missionaries in Teaching, who died in 1911, after a life dedicated to the education of girls.

"They are the sons and daughters of the Church, who have chosen the path of service following the Lord. Holiness in the Church always has its source in the mystery of Redemption, which is prefigured by the prophet Isaiah in the first reading: the Servant of the Lord is the just one, he shall justify the many, their iniquity he shall bear" (Is 53.11), Jesus Christ, Crucified, Risen and living in glory. Today's canonization is an eloquent confirmation of this mysterious salvific reality. The tenacious profession of faith of the seven generous Disciples of Christ, their conformation with the Son of Man today shines in the whole Church."


"Let us now - he said a little later, before the Angelus - turn to the one who is the Queen of all the saints, the Virgin Mary, with a thought for Lourdes, affected by severe flooding of the Gave River, which has also flooded the cave of Apparitions of the Virgin Mary. Specifically, today I wish to entrust to the maternal protection of the Virgin Mary, the missionaries - priests, religious and laity - all over the world who are spreading the good seed of the Gospel. We pray for the Synod of Bishops, which in recent weeks is facing the challenge of the new evangelization for the transmission of the Christian faith."