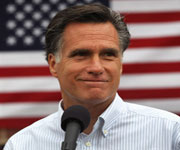 The Billy Graham Evangelistic Association has responded to criticism from people accusing the Reverend Billy Graham of becoming too political by praising Republican presidential candidate Mitt Romney. "Throughout his public ministry spanning more than six decades, Mr. Graham has been careful to remain non-partisan, but has been a consistent advocate for a biblical worldview and taken a strong stand for biblical values with respect to political issues," said Larry Ross, spokesperson for Billy Graham.


"During this time, a number of political leaders and candidates have stopped by to visit Mr Graham in his home as their travels would bring them to the region, including President Obama in April 2010 and Senator John McCain while the presumptive Republican presidential nominee prior to the 2008 campaign," Ross noted.


Romney visited Graham and his son, Franklin Graham, at their home in North Carolina earlier this month. The popular preacher praised the Mormon politician for his "values and strong moral convictions". The BGEA website has also published several articles urging Americans to vote based on issues such as the traditional definition of marriage and the sanctity of life, and released an ad featuring a direct statement by Graham. Unlike President Obama, Romney is in favour of the preserving marriage between one man and one woman, and wants abortion in most cases banned.


An article which calls Mormonism a "cult" was removed from the BGEA website following the Republican's visit. This caused a number of critics, both from the conservative and liberal sides, to announce their disappointment with Graham's apparent support of Romney. Timithy Beal, an author and religious scholar, who is a Florence Harkness Professor of Religion at Case Western Reserve University, wrote in an open letter to Graham that he feels the evangelist is allowing his voice to be leveraged for a political cause.


"It truly pains me to call you out on your decision to be party to this ad," Beal wrote, noting that he grew up in a household that revered Graham as a "man of God" and was inspired by his work. He criticised the preacher for claiming that the biblical definition of marriage is set in stone and not open for discussion, and that he is using this stance essentially to voice support for Romney.


"[A]s soon as you crack open a Bible, things gets messy and complicated, leading to anything but a clear biblical view on homosexuality, let alone a biblical definition of marriage. Sadly, this is not about trying to be faithful to the text; this is about converting religious capital to political capital. Which is why it is so heartbreaking to see your name and face front and centre. I guess I still expect you to rise above that cynical sort of political fray," Beal wrote.


Ross, however, said that "the biblical values ads sponsored by the Billy Graham Evangelistic Association (BGEA) that ran the following week are also consistent with both the mission of the ministry and Billy Graham's personal methodology throughout his public ministry to diligently and consistently remain politically neutral and non-partisan."


He added that "against the backdrop of moral decline and a cultural shift in our nation that reflects timely issues, Mr. Graham's quotation in the ad is an extension of his faithful preaching of a timeless message and strong stand on biblical values for more than six decades."