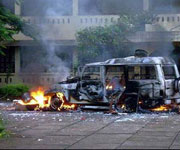 Thirteen people have been sentenced to six years rigorous imprisonment by a fast track court in Odisha for their involvement in 2008 Kandhamal riots. Additional Sessions Judge (fast track Court-1) Sobhan Kumar Das acquitted six others for lack of evidence on Saturday. The judge fined the convicts Rs.5,000 each or ordered them to undergo six more months of rigorous imprisonment in default of payment.


The prosecution argued that the convicts had torched houses of those belonging to the minority communities at Salagduda during the riots on September 09, 2008. The violence was a sequel to the killing of senior VHP leader Laxmananda Saraswati at his Jalaspeta ashram in the district.