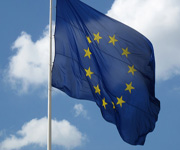 The World Council of Churches has congratulated the European Union on receiving the Nobel Peace Prize. The prize has been given to the EU in recognition of its contribution to the advancement of peace and reconciliation, democracy and human rights in Europe. Some have criticised the decision to give the prize to the EU in light of the prolonged economic crisis and social unrest affecting the region. However the WCC praised the EU's efforts to bring peace and stability to Europe following two World Wars that killed millions of people.

World Council of Churches' General Secretary Dr Olav Fykse Tveit thanked EU leaders for their commitment to peace, reconciliation, democracy and human rights. "The EU's role over the years in responding to crisis situations, especially some of the longer-term security threats, has been widely acknowledged and recognised over the years" he said.


The events of recent years have shown the urgency of not giving up the intentions and values that guided the process so far. At a time when the European Union is confronted with difficult challenges and struggling internally and in its external relations to uphold just and equitable relationships which make for peace, the award is an encouragement to focus on the values of peace, justice and solidarity in the search for a viable and vital future.