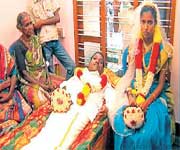 Twenty six year old Vijayakumar from Palliyadi village in Kanyakumari District, Tamil Nadu in India who has been bedridden for several years, hardly expected a girl Manjusha next door to bring back lost smiles on his face. Manjusha, (19) who studied up to Class X, could bring about that magical transformation in a disabled person's life, as she entered into wedlock with Vijaykumar at a simple function in the groom's home on Thursday. "It is like compassion and love tying the knot between two humble souls", said Jayakumar, the groom's younger brother told by the phone at their home at Palliyadi Cherikadai.

Vijayakumar and Jayakumar were born twins to George William and Annammal in the same village. The boys studied the Local Government school and were a happy, playful duo till they were in Class V. Then, a sudden, shocking ailment knocked the boys off their youthful zest to confine both of them to bed, perhaps for the rest of their lives.


"We consulted several doctors, including at a top speciality private Hospital in Chennai, two years back; but none of them have been so far able to diagnose this mysterious disease," said Jayakumar, who is also bedridden like his twin brother for nearly 16 years in an unexplained medical manifestation of the "twin-effect."


"Our parents have spent lot of money on our treatment, but even the cause of our affliction is not known yet; we only have our house left," Jayakumar said without resentment. The Tamil Nadu Social Welfare Department has sanctioned the disabled twins a monthly pension of Rs.1000 each, a small blessing the family counts upon as their elderly father is also unable to go for regular work.


Manjusha's family, from Kerala, has been the disabled twins' neighbours for several years now. The girl first got to know Vijayakumar when she visited his house for a group prayer meeting two years back.


"I began to help him in small ways to ease his pain, and in the course of time I got to like him; I then decided to marry and live with him for the rest of my life; I will also take care of his younger disabled brother and their aged parents," Manjusha said over phone.


Manjusha's Hindu religious background did not come in the way of her love for Vijayakumar culminating in marriage. The girl's Father, who works as a wood-cutter in the area and her Mother "respected my affection for the boy," she said.