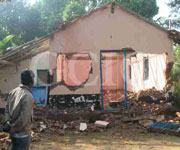 About 15 years ago, Blessing Youth Mission built a Church at Chippagiri Gowtown village, Yellapura Tq. in Karwar District, Karnataka State, India. The church is shepherded by Pastor Suresh Kaithan Siddi (40). He has a wife (35) and two sons. The family was depending the church. The church has 30 families and all of them worshipping there.
You can browse more latest Missionaries News Updates Here!!!
A month ago some men belonging to Sangh Parivar approached Pastor Suresh and accused him of converting people to Christianity and warned him of serious consequences. Later they gave a complaint at the Yellapura Police station when the Police came to the village and organized a Peace Committee comprising the Pastor and some village folks. After discussion they came to a settlement of peaceful co-existence.
November 20, 2012 around 10.30 pm some of the Sangh parivar men along with some villagers came with clubs. They locked up 10-12 believers’ houses and threatened them that if they tried to come out they will be killed. Around 11 pm they began to demolish the Church measuring 15x30 feet. In no time they razed the church and set fire to the rubble and debris.
The Pastor went to Yellapura Police Station this morning, at 8 am and lodged a complaint about this incident. Mr. Shreedhar CPI visited the spot, after inspection he said that due procedure will be followed to nab and punish the culprits.
The believers belonging to this demolished church are mostly labourers and daily wage earners. GCIC is in touch with the Police Officers and Pastor Suresh.
Browse Beautiful World Heritage Sites. More Missionaries News Updates Click Here!!!
Latest Christian News Updates