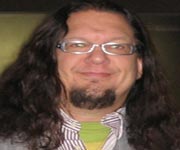 Penn Fraser Jillette is an American illusionist, comedian, musician, and best-selling author known for his work with fellow magician Teller in the team Penn & Teller and advocacy of atheism, scientific skepticism, libertarianism and free market capitalism named the Bible as one of his six favorite books such as in a column for "The Week." Anyone who reads all of it will become an atheist, Jillette asserts. Besides entertaining audiences with his friend Teller (born Raymond Joseph Teller), Jillette is well known for being outspoken about his atheist and libertarian views.


"If you're considering becoming an atheist, read the Bible from cover to cover," Jillette wrote. "No study guides, no spins, just read it. Sometime between when God tells Abraham to kill his son and when Jesus tells everyone to put him before their families, you'll be an atheist."


Jillette's other five favorite books such as 1) Moby-Dick, 2) The Secret Life of Houdini: The Making of America's First Superhero, 3) Thinking Fast and Slow, 4) Human Smoke and 5) The Man Who Fed the World: Nobel Peace Prize Laureate Norman Borlaug and His Battle to End World Hunger were also tied in different ways to his atheism. Herman Melville's Moby Dick is Jillette's favorite book, which he views as an allegory about a foolish search for God because "the white whale is God, and Ahab is wasting his life chasing God."


A book about World War II "proves there's no God" and a book about the "green revolution" describes people "doing God's work, because God isn't going to."
Source THE WEEK