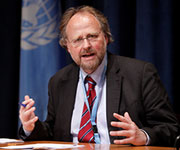 In an National Religious Broadcasters media advisory, the UN Special Rapporteur on freedom of religion or belief, Heiner Bielefeldt told the UN General Assembly, "The right of conversion and the right not to be forced to convert or reconvert belong to the internal dimension of a person's religious or belief-related conviction, which is unconditionally protected under international human rights law." The media advisory says that the Special Rapporteur faulted Governments, as well as non-state actors acting out on widespread societal prejudices.


Bielefeldt noted: "Many states impose tight legislative or administrative restrictions on communicative outreach activities. Many such restrictions are conceptualised and implemented in a flagrantly discriminatory manner, for instance, in the interest of further strengthening the position of the official religion or dominant religion of the country while further marginalising the situation of minorities. Members of religious communities that have a reputation of being generally engaged in missionary activities may also face societal prejudices that can escalate into paranoia, sometimes even leading to acts of mob violence and killings."


Bielefeldt urged nations to consistently respect this fundamental right protected under Article 18 of the Universal Declaration of Human Rights, which states, "Everyone has the right to freedom of thought, conscience and religion; this right includes freedom to change his religion or belief, and freedom, either alone or in community with others and in public or private, to manifest his religion or belief in teaching, practice, worship and observance."


Bielefeldt is a German professor of human rights and the current Special Rapporteur on Freedom of Religion or Belief of the UN Human Rights Council. Bielefeldt has studied philosophy, theology and history and received his Ph.D. at the Philosophical Faculty at the University of Tubingen. He has been a lecturer and researcher at several German Universities and was for six years director of the German Institute for Human Rights in Berlin. He is now serving teaching political science, philosophy, law and history at the University of Erlangen-Nuremburg. He has also been involved in interfaith dialogue.