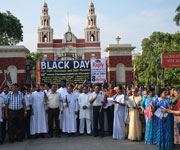 Conversion from Hinduism to Christianity has not helped changed the social and economic status of Dalits in Karnataka, claimed speakers at a conference in Mangalore on Monday. Despite their conversion to Christianity, Dalits faced discrimination in every aspect of their lives, expressed Deputy Director at the Centre for studies of local culture at Kuvempu University Dr Shanmukha A and Research Scholar Shankarappa N S. They were speaking at a session on 'Problems of Christian Dalits in Karnataka' at the IV international conference on 'Rethinking religion in India'.


"The evil system of caste continues to exist even after the conversion. Conversion even deprives the Christian Dalits from seeking benefits under SC and ST quota, making their life more miserable. Hence conversion does not solve problems faced by the Dalits," Shankarappa said, as quoted by the Deccan Herald.


The four-day international conference is aimed at studying the newly emerging attempts to study religions and traditions of India differently. It was earlier opened by the Bishop of Mangalore Diocese Aloysius Paul D'Souza. In his address, D'Souza stressed on how rethinking on religion was needed to addresses issues of inhuman treatment of religious minorities.


"The suppression of religious minorities continues unabated in India. With the influence of religion over all the important aspects of national psyche, the religion has been enjoying its position. But we must ensure that the religion helps for the betterment of the society, rather than turning destructive," said the Bishop.