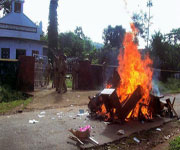 A fast-track court today sentenced 12 people to six years' imprisonment after they were convicted of being involved in the violence during 2008 riots in Odisha's Kandhamal district. Additional Session Judge B N Mishra of Fast Track Court-II also imposed Rs.5,000 each as fine on the convicts in connection with arson, rioting and house torching at Jarkinaju village under Raikia area on August 25, 2008.


The court ordered that in case of non-payment of the fine amount, each convict would be required to undergo an additional jail term of one year. However, 10 others who had been accused in the case were acquitted due to lack of evidence. The tribal-dominated Kandhamal district had witnessed largescale violence in the aftermath of the killing of VHP leader Laxmanananda Saraswati and four of his followers on Janmasthami day on August 23, 2008.


About 38 people were killed and hundreds of houses and places of worship torched during the communal violence in the district and elsewhere, sources said.