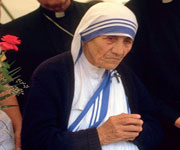 A week-long art exhibition and film session on Mother Teresa began in New Delhi. Former Election Commissioner of India Navin Chawla inaugurated the event titled MOTHER TERESA- Communicator of Compassion, at the Hungarian Information and Cultural Centre, New Delhi. The program included screening of the film In the Name of God's Poor directed by Kevin Connor.


The event is organised by Art.i, established by the Office for Social Communications of the Catholic Bishops' Conference of India in cooperation with the Hungarian Centre. The exhibition gallery showcases 35 paintings done by 24 renowned artists from 9 Indian states during an art camp held in Kolkata in 2011. The camp was held under the same title to mark the first birth centenary of the Blessed Teresa. The paintings provide a glimpse into Mother Teresa's mission of compassion for all people, especially the poorest of the poor.


Archbishop Vincent Concessao of Delhi released a booklet titled Unum Cor which feature articles on art, paintings of the exhibition and a brief bio-data of the artists on the occasion. The event, which concludes on Nov. 10, includes film sessions on the Mother by renowned film makers. ART.i, which was established in 2010, is a forum to bring together artists of all faiths to promote initiatives to foster greater collaboration and professional support.