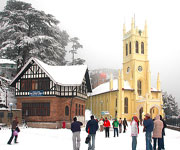 The Forum of Christian Pastors in Shimla has raised a demand from the candidates in fray for the Nov. 4 assembly elections. "Good Friday, which is a Central Government holiday, has been converted into restricted holiday by the Himachal Pradesh State Government," said Francis K Rana, Forum President. He said that a meeting was held two days ago where the pastors felt that the Christian minority has a significant legacy in town but is not being considered a part of the mainstream.


Reverend Mushtaq A. Malk, Presbyter in charge of the traditional Christ Church, said, "Good Friday holds significance for our community as it marks the time of death of Jesus Christ and his resurrection, which is the foundation of Christianity." "We are raising this issue ahead of the assembly elections so that it is declared gazetted holiday by any party that forms the government," he added. He said that around 4,000 people of the community are residing in Shimla. Amongst these nearly 200 families are aligned to the major five churches.


According to Church historians, apart from founding main line churches, a host of independent churches have sprung up over the years in Shimla. The main churches have second and third generation of Christians from Kotgarh in Shimla and Kangra District as members, besides Punjabi Christians. Some South Indian members who have been working in the hills are also members of the Catholic Church.