Jesus does not describe the end of the world says Pope 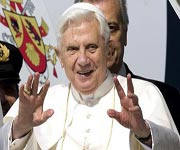 Jesus does describe the end of the world. When he uses apocalyptic images, he is not acting as a 'seer'. On the contrary, he wants to rescue his disciples in every age from the curiosity about dates and soothsaying, and give them instead an essential key to understand especially the right path to follow, today and tomorrow, for entering eternal life." In saying these words today, before the Angelus prayer in Saint Peter's Square, Benedict XVI "demythologised" false images about the end of the world based on false interpretations of Biblical passages.


Citing one from the Gospel of today's Mass (Thirty-third Sunday in Ordinary Time, B, Mark 13: 24-32), the pope noted "cosmic images of the apocalyptic kind," whereby 'The sun will be darkened, and the moon will not give its light, and the stars will be falling from the sky, and the powers in the heavens will be shaken' (v. 24-25)," images that feed a market for apocalyptic and catastrophist ideas, second sights and dates that are typical of wizards s and pseudo Christian sects like the Jehovah's Witnesses.


"Jesus uses images and words from the Old Testament," the pontiff explained. In particular, "he inserts a new centre; that is himself, the mystery of his persona, death and resurrection." And if "today's passage opens with a few cosmic images of the apocalyptic kind," this element is relativised by what follows: 'And then they will see 'the Son of Man coming in the clouds' with great power and glory' (v. 26)." "Jesus himself is the 'Son of man' who connects the present with the future," the pope noted. "The ancient words of the prophets finally found a centre in the person of the Messiah from Nazareth. He is the true event that, amid the world's disorder, remains a firm and stable element."


"Today's Gospel provides another passage to confirm this, when Jesus said: 'Heaven and earth will pass away, but my words will not pass away' (v. 31). In fact, we know that in the Bible, the Word of God is at the origin of creation. All creatures, starting with the elements of the cosmos like the sun, moon and the firmament, obey the Word of God, and exist because 'called' by it. The Word's creative power became concentrated in Jesus Christ, the Word made flesh, and flew through his human words, which are the true 'firmament' that directs man's thoughts and journey on earth.


For this reason, Jesus does not describe the end of the world. When he does use apocalyptic images, he is not acting as a 'seer'. On the contrary, He wants to rescue his disciples in every age from the curiosity about dates and soothsaying, and give them instead an essential key to understand especially the right path to follow, today and tomorrow, for entering eternal life. Everything passes but the Word of God does not change. As we stand before it, each one of us is responsible for our own behaviour. It is upon this that we shall be judged."


"Dear friends," said Benedict XVI in concluding, "even in our times natural disasters occur; sadly, wars and violence as well. Even today we need a stable foundation for our life and hope, the more so because of the relativism in which we are immersed. May the Virgin Mary help us welcome this centre in the Person of Christ and his Word"