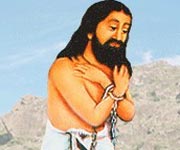 Martyr Devasahayam Pillai was declared as blessed by the Pope Benedict XVI on 28 June, 2012, making him the first layman from India to be declared so. This was an important step prior to sainthood and in the country of his origin; he could be given the veneration due for a saint. The Diocese of Kottar will organise a function at the Carmel School campus, Nagercoil on December 02 to commemorate the declaration of son-of-the-soil Devasahayam Pillai, a Catholic Martyr, as Blessed.


Chairman of the Congregation for the Causes of Saints, Angelo Cardinal Amato would be the Papal delegate at the event. Over 1 lakh people were expected to attend, said Kottar Bishop Peter Remigius. Devasahayam was born Neelakandan Pillai in 1712 and he became a Christian in 1745 after learning about Christ through a Dutch prisoner, Captain De Lannoy and took on the name Lazar.


Traditionally, the story went that he moved freely with all castes, much to the ire of the higher caste folk. This led to severe consequences such as imprisonment, parading on a buffalo, being put in iron chains, lashings and more, for Devasahayam. He died in 1752 at Kattadimalai, where he was finally shot dead. Speaking of the Martyr, Bishop Remigius said, "At one point during his torture, Devasahayam wanted water, which was not provided to him. Using his elbow, he touched a nearby rock and a spring of water started flowing there.


This place still exists on the campus of a church. He died for the sake of his belief and was a witness to Christian faith." A souvenir on the beatification of the Venerable Devasahayam Pillai would be released at the event. Bishop Remigius extended an invitation to all to attend the celebrations.