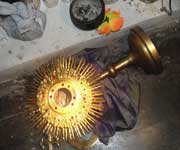 The Bangalore unit of the Karnataka Komu Souharda Vedike has asked the Karnataka Government to invoke the Goonda Act against those responsible for the recent attack on a church in Davangere. Office-bearers of the vedike, Nagari Babaiah, Ananda Kumar, Rev.Fr.Manohar Chandra Prasad and K.Hyder told presspersons that the government should extend protection to the Christian community in Davangere and withdraw the "false cases" against the victims of the attack.

Prof. Babaiah said Sangh Parivar activists attacked Christians who gathered for a prayer at a church in Davangere on October 25. Over 20 persons, including women and children, were injured. "The police watched the attack helplessly," he said. He alleged that instead of acting against the culprits, the police asked the church authorities to suspend the prayer and registered cases against a pastor and a college student.


Attributing the attack to the release of those arrested in connection with previous cases of church attacks, Prof. Babaiah alleged that the police were in hand in glove with the Sangh Parivar. The Bharatiya Janata Party government had withdrawn cases against 560 people allegedly involved in creating communal disturbance in the State. Though similar incidents had been reported from Bangalore, the police were not acting against them, he alleged.


Stating that the Christian community was living under fear after the BJP Government came to power in the State, Mr.Anand Kumar said the Sangh Parivar was attacking institutions run by the minorities with an eye on the Assembly elections. Similar incidents had been reported from Belur, Arkalgud and Arsikere in Hassan District. But the police had not taken any action, he added.


Mr. Hyder said that the Government was curbing the rights of the minorities for the past four years and they should give a fitting answer to the BJP in the Assembly elections.