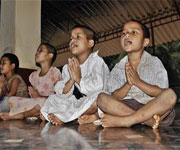 A group of Hindu nationalists assaulted nine members of the Pentecostal Church in in the village of Chikkamatti, Shimoga District, Karnataka on Monday alleging forced conversions. Two of them were so severely beaten that they had to be taken to the Bhadravathi Government Hospital. The newly baptised say that they, of their own free volition, embraced Christ. Eventually Karnataka Police arrested the Christians for baptising 40 Tribals. Police instead arrested the Christians for "hurting religious sentiments."

Sajan George, President of the Global Council of Indian Christians (GCIC), said he would take the case before the National Human Rights Commission (NHRC) to demand justice for the state's Christian community, which is increasingly vulnerable and terrified. Troubles began on Sunday when Rev Prashanth of the Indian Apostolic Church, baptised 40 Tribals in the village after they made the request to convert and attended the catechesis.


The next day, about 20 Hindu radicals went to see the newly baptised and accused them of breaking local ancient customs. They threatened them of serious consequences if they did not abjure Christianity. Faced with the converts' refusal, some of the Hindu activists attacked them with sticks. Others went instead to the police station in Holehonnur, where they filed charges against the Pentecostal pastor and three members of his congregation for forced conversion.


Police arrested the priest and other Christians under Article 295 A of the Indian Penal Code, which bans "Deliberate and malicious acts intended to outrage religious feelings of any class by insulting its religion or religious beliefs". Jayatheertha, a local leader with the ultra-nationalist Bharatiya Janata Party (BJP), led the group of Hindu radicals.


"This is a travesty of justice," Sajan George told AsiaNews. "Whose religious sentiments were offended? Those of the newly baptised believers, who of their own free volition embraced Christ, or those of the so-called defenders of the religion?" "Here, the arrested Christians are the victims, while the perpetrators, enjoying political patronage and silent acquiescence of the administration, go scot free."