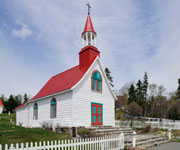 Sainte-Croix-de-Tadoussac Mission Church, built between 1747 and 1750 at the confluence of the Saguenay and St. Lawrence rivers and considered Canada's oldest wooden church, has been designated a national historic site. "It is the only remaining original place of worship that tells the stories of the missionary activities of the Jesuit fathers in the remote regions of New France and of the conversion of the Innu First Nation people (the Montagnais) to Christianity," said a release from Parks Canada, which operates many of the country's national historic sites.


The small chapel constructed at Tadoussac is a village in Quebec, Canda and about 200 kilometres Northeast of Quebec City at the confluence of the Saint Lawrence and Saguenay rivers. It was France's first trading post on the mainland of New France and an important trading post in the seventeenth century, making it the oldest continuously inhabited European settlement in Quebec and the oldest surviving French settlement in the Americas. Its architectural features, including a bell tower and front-gable roof, make it "an outstanding example of mission churches erected in New France."


The original siding of vertical boards was replaced in 1866-1867 with horizontal clapboard siding. The church is among recent Quebec additions to the roster of over 1,500 places, persons and events that have been officially commemorated for their national historic significance. The others announced by Parks Canada are artist Marc-Aurele Fortin, museum builder Frederick Cleveland Morgan, the former Lamaque mine and Bourlamaque mining village in Abitibi, the Inuit co-operative movement and the Arvida historic district.