Pastor Moses Rajasekar went to be with God 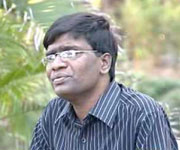 Pastor Moses Rajasekar is a Man of God who himself is a living testimony, went to be with the Lord yesterday on November 05, 2012. A salute to a great man of God who lived a great dedicated life midst all his sickness and weakness, he continued to serve Him faithfully. He was a good talented singer and a preacher. He formed a congregation with the blessing of God and a church was opened by Brother. Mohan C. Lazarus.

He was born on May 31, 1967 at the Hill place of Vervelli, Valparai, Coimbatore District in Tamilnadu, India, to Mr. Moses and Mrs.Mariyammal. After completion of his early education, he joined Sister. Padma Mudaliar's seminary and completed his theology. Then he left home for Chennai. A few years after graduating from theology, he began his missionary work in a house at Virukampakkam and Nesappakkam. During that time he bought a place at Chulaipackkam for his ministry. He worshiped God at his tent besides he lived there.


At the age of 19, he suffered diabetes and he successfully continued his ministry through his talent of singing song. He was remembered around the world through this song "Appale po sattane ... Appale po sattane ..." and "Kirustavane disturb pannade avane assaulta ennividate". He graced the Lord through his songs. Small villagers and ordinary person were attracted by his songs. He published lot of songs to the Christian World.


In the meantime, he fell in deep sick and both kidneys were affected in 2005 and he made 2600 times blood replacement. However, he continued his ministry without tired. During 2008, a terrible tragedy met his life and he lost both eyes.


In 2011, he constructed a church with the blessing of God and the church was opened by Brother. Mohan C. Lazarus. He passed away on November 05, 2012. He lived with his wife Ruth Rajasekhar, two daughters Priya and Pilomina Nakul and a son Kingsley Rajasekhar. Pray for his family members and his sole rest in peace with God.