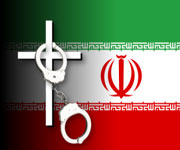 British Christian legislators expressed concern Monday, November 19, about the serious and growing persecution and discrimination of Iranian Christians and said at least dozens of believers remain detained amid a crackdown on Christian converts in Iran. In their new report, Britain's 'All-Party Parliamentary Group' (APPG) said the British Government should pressure Iran to uphold the fundamental right of religious freedom for all Iranian people. They also urged the release of Christians, including Pastor Farshid Fathi, who has held in Tehran's notorious Evin prison since December 2010.


The British parliamentarians said Pastor Fathi is among those targeted because of his Christian ministry. Fathi, who is to serve another four years in jail, is among "dozens of Christians currently imprisoned and one of hundreds...arrested over the past two years," the APPG-report said. "This state-led religious persecution is contrary to not only international law, but also to Iran's own constitution."


British legislators began collecting evidence in April 2012 from eyewitnesses supported by Elam Ministries, a major mission group founded by Iranian church leaders to evangelize and help Iranian Christians. The politicians also traveled to neighboring Turkey where several Iranian Christian refugees live in exile. It wasn't easy listening, a key legislator acknowledged. "During the course of this inquiry we have cataloged evidence of widespread persecution of the most severe kind," explained parliamentarian David Burrowes, the Chairman of the inquiry.


Britain's David Burrowes has been leading investigating into reported persecution of Iranian Christians. "We heard extremely harrowing stories of people who have lost their jobs, their freedom, their children and even their lives, through the Iranian Government's campaign of repression against Christians," he added in a statement.


He also said that in recent years hundreds of Christians have been arrested and many are held without charge in appalling conditions, all because of their faith. He officially presented the 35-page Iran report to Alistair Burt, Britain's Minister of State for the Middle East at a London gathering attended by the UN Special Rapporteur for Human Rights in Iran, Ahmed Shaheed, and other politicians and Christian leaders.