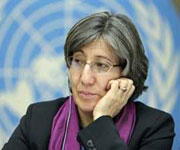 The 2012 edition of the Mother Teresa Memorial International Award for Social Justice conferred by the Harmony Foundation went to Sima Samar, a former Afghan Vice President and Mala Yousufzai, the 15-year-old Pakistani girl attacked by the Taliban for her commitment to women's rights. The teenager is presently hospitalised in Birmingham, Great Britain, after she was shot in the head on 9 October by Muslim extremist. Abraham Mathai, President of Harmony Foundation said the two women were chosen for their courage for putting their lives on the line for an ideal.


Sima Samar was recognised for her work in the field of women's rights, education and emancipation. After the Taliban's takeover of Afghanistan, she fled to Pakistan where she worked for 20 years to raise awareness about the plight of Afghan women. After the theocratic regime was overthrown, she became the most prominent woman in the country. Currently, she is in charge of the Afghan Independent Human Rights Commission (AIHRC).


Malala Yousufzai is a teenager who was chosen for a special jury award in recognition of her courage and her determination to fight against discrimination against Pakistani girls in the Swat Valley, where the Taliban have imposed Sharia.


From Great Britain, Malala's father, Ziauddin Yousufzai sent a touching letter on his daughter's behalf thanking the Harmony Foundation for the award. "This means a lot to us," he writes, "especially during our time of crisis. Honouring Malala with this award sends out a strong message of support to those whose daughters have to fight and speak out for their basic right to education."


A special national awards were given to Nayyar Kuldeep, a famous Indian writer, for his contribution to India-Pakistan peace efforts; to Vinay Shetty, for furthering the cause of blood donation; Flavia Agnes, a lawyer, for her commitment to women's rights and fight against domestic violence; Gujarat police officer Sanjeev Bhatt, for his efforts in favour of communal dialogue and the Shillong Chamber Choir for promoting national integration through music. The Pandita Ramabai Mukti Mission was also recognised for its work towards empowerment of women.


In October 2005, Abraham Mathai founded the Harmony Foundation to promote the idea of peace, dialogue and help for all communities without distinction of religion, caste, creed, gender or region. In 2007, the Foundation established the Mother Teresa Memorial International Awards for Social Justice in honour of Mother Teresa of Calcutta.