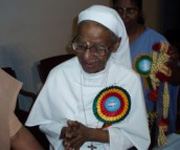 Salesian Missionaries of Mary Immaculate Sister Claire received the Assisi Art Award 2012 from Srinivasa Murthy, Chairman of the Karnataka Legislative Council. During the function, more than 1,000 lay people, priests, nuns and church leaders attended. The award comprises a citation and a cash prize of 50,000 rupees. Sr Claire is the first recipient of the Assisi Award, set in 2010 by the Office for Social Communications of the Catholic Bishops' Conference of India (OSC-CBCI) and ART.i, a forum of Indian Christian artists and art lovers.

The speakers at the function spoke of the eloquence of the strokes of the nun's painting brush, which produced paintings reflecting the messages of Jesus Christ and the mission of the church in India. According to Fr. Paul Kattukkaran, Secretary of ART.i, the Salesian Sister has drawn more than 1,000 Christian paintings and greetings cards depicting Christian ideals and the life of Jesus Christ. Reverend Gudrun Loewner, a German theologian who has specialized on Indian Christian paintings, said that the nun's paintings were refreshing and harmonious.


According to Loewner, more than 200 churches in India have displayed the nun's paintings which are the results of her prayer and meditation. Archbishop Bernard Moras of Bangalore said that the paintings were Sr. Claire's spiritual expressions and personal experiences with God. She prayed, meditated and received inspiration from the Holy Spirit before starting each painting, he said.


Father George Plathottam, Secretary of the Office for Social Communications of the Catholic Bishops' Conference of India (OSC-CBCI), read out the citation which said that the paintings integrated Indian cultural traditions and heritage and promoted communal harmony and inter-religious dialogue. Sr. Claire told the audience that Christian artwork is God's work and artists continue to do the creation of God. The 75-year-old nun is considered to be the senior most Indian Christian artist in the country and her paintings have been expressions of her experience of faith in God.


Pope Benedict XVI, who was attracted to her paintings, especially on the passion of Jesus Christ, had announced that she was a "Church artist." The Pope invited her to the Vatican to be felicitated but being a very simple and unassuming person, she declined the invitation. The Carmalites of Mary Immaculate Fr. Thomas Aikara noted that Claire's artworks were icons of integration of "Jesus experience and Indian religious traditions."


She was born in 1937 in a Hindu family in the temple town of Tirupathi, Andhra Pradesh. At a very young age, she was attracted to the teachings of Jesus. To discourage her from this, her family fixed an early marriage but a few days before it, she ran away from home and came to Bangalore where she got refuge in a convent sixty years ago.