Who is real loser in United States? 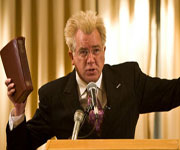 Evangelist Bill Keller, the world's leading Internet Evangelist and the founder of Liveprayer.com, with over 2.4 million subscribers worldwide reading the Daily Devotional he has written every morning for 13 years on the issues of the day from a Biblical worldview, says that despite being blamed for President Obama being re-elected because of the nearly 2.2 million who pledged to write in the name of JESUS for President, the real loser of the election Tuesday is the United States and the Christian church that compromised Biblical Truth for support a member of a satanic cult.


Keller set up a website to encourage Christians to say NO to President Obama and NO to Mitt Romney and instead write in the name of Jesus. Nearly 2.2 million true followers of the Biblical Jesus Christ signed up to take a stand for their faith and vote for Jesus, as opposed to either of the two major party candidates or the many third party candidates running.


Keller said that for Christians it was a rare opportunity to make a statement for their faith and stand for Biblical Truth. Keller has been in the national media for the past 6 months saying that no Christian in good conscience could vote for the most pro-baby killing, pro-homosexual, pro-enemy of Israel President in history. Likewise, he stated that no Christian in good conscience could vote for a 5th generation high priest of a satanic cult that lead souls to hell through a false gospel, and a man who lies to people by calling himself a Christian when the beliefs of his cult are 100% inconsistent with Biblical Christianity.


Last November in one of his Daily Devotionals, Keller said that if the election came down to President Obama and Mitt Romney, it would literally be Satan flipping a two-headed coin with his head on both sides. He went on to say that the real message of this election would be that whoever God allows to rise to power for the next four years will be a furtherance of His judgment on this nation for our sins and wickedness. He said that the warning in Deuteronomy 8:20 referring to God destroying a nation that turned its' back on Him was applicable to the United States.


On the record, Keller was quoted as saying, "It has been sad to see supposed Christian leaders like Ralph Reed, Billy Graham, and a host of pastors and other major ministry leaders, sell out the faith by telling Biblical Christians that there was nothing wrong with voting for a man whose satanic cult that leads souls to hell with a false gospel, a man who thinks he will die and become the 'god' of his own planet. These modern days Judas' have sold out the Gospel of Jesus Christ for the temporal politics of this world over the eternal souls of men. There is no such thing as the lesser of two evils, since the lesser of two evils is still…EVIL!" He continued, "Politicos like Limbaugh, Hannity, FOX News, and the conservative media underestimated the fact true Biblical Christians would NOT support a man who represented a satanic cult leading souls to hell. Their eternal faith trumps temporal politics!"


Keller added, "The problems of this nation are not political, they are spiritual. As sad as I have been to see the number of supposed leaders sell out the faith and give their followers tortured reasons they should vote for the member of a satanic cult, I have been equally as encourage by the number of men and women who love the Lord and would not be intimidated or bullied into voting for a member of a cult that would become mainstream, leading countless souls to hell if elected. Despite the millions of dollars the Mormon cult and members of that cult like Glenn Beck invested in trying to help Mitt Romney become President, God said NO!"


Keller concluded, "It is God who allows men to rise to power and takes men out of power. While many may blame me for helping Obama get elected, that is pure nonsense. Christians need to understand God has the final word. Only God could have sent a once in a lifetime storm like Sandy that many claim turned the election for President Obama. Nobody has been more vocal for the past 4 year than I have that President Obama is an enemy of God on every spiritual issue of the day. I will continue to pray for him, but challenge him on his support of abortion, gay marriage, and Israel, and any other issues that he opposes God and the Bible"


Keller is challenging the 2.4 million readers of his Daily Devotional that now the distraction of the election is over, Christians must focus on the work of turning this nation back to God and His Truth. He says that regardless who is in political power, the real problems of the nation are spiritual, and unless this nation turns back to God and Biblical Truth it is destined to see the God's wrath and judgment continue on our nation.