Who will go to hell? An Election Talk 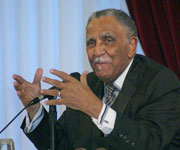 Pastor Joseph Lowery, a civil rights movement hero who delivered the benediction at President Obama's inauguration, reportedly said that he is shocked that any black Americans would stay home with Obama on the ballot and suggested that all or most white people would go to hell. The local outlet paraphrases Lowery's comments. "Lowery said that when he was a young militant, he used to say all white folks were going to hell," the Monroe County Reporter (Ga.) says in covering a rally in Forsyth, Georgia. "Then he mellowed and just said most of them were. Now, he said, he is back to where he was."


The local mayor, who attended the rally, rejected that statement from Lowery. "The Bible doesn't say anything about white or black to go to heaven," Mayor John Howard said. "I have great number of black and white friends. I've been in the military. I make friends with everybody. I'm too old for enemies."


The 91-year-old Lowery worked with Dr. Martin Luther King, Jr., and played a key role in various important moments in the civil rights movement, such as the march from Selma, Ala., to Montgomery, Ala. "Lowery was awarded the Medal of Freedom in 2009 by Obama and was elected earlier this year to lead the State's delegation to the Democratic national convention," the Georgia Tipsheet recalled. He sees this election in explicitly racial terms. "All that he did with the stimulus was genius. Nobody intelligent would risk this country with Romney."


Lowery's benediction at Obama's inauguration emphasized peaceful relations between all Americans. "And now, Lord, in the complex arena of human relations, help us to make choices on the side of love, not hate; on the side of inclusion, not exclusion; tolerance, not intolerance," he prayed in 2009. "And as we leave this mountain top, help us to hold on to the spirit of fellowship and the oneness of our family."