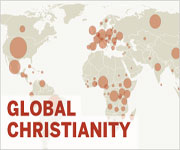 More than 80% of the world's population belongs to an organized religion, and the rest do not belong to any religion, although among them there are large percentage of believers in God or some spiritual power. This is some of the data provided by a demographic study published by the Pew Research Center's Forum on Religion & Public Life, called The Global Religious Landscape (Pew Forum). The study, based on data from the 2010 and on 2500 censuses, shows that out of a world population of 6.9 billion, Christians make up 32%, Muslims 23%, Hindus 15%, Buddhists 7 %, Jews 0.2%. The rest, people not belonging to any religion, embraces atheists, agnostics, but also people with spiritual beliefs, with no ties to organized religion.


Out of a total billion people without any religion, 62% lives in China (about 700 million, almost half the population of the state), followed by Japan with 72 million (57% of the national population) and the United States with 51 million (16.4% of the country). Among them, however, many claim to believe in God or a higher power: 7% of the Chinese people "without religion", 30% of French people with no religion, 68% of Americans with no religion.


Christians are the majority in 157 countries, Muslims in 49, including 19 of the 20 states of the Middle East and North Africa. Hindus are the majority in only three countries: India, Nepal, Mauritius. The countries with the highest concentration of Christian populations are: The United States, Brazil, Mexico, Russia and the Philippines.