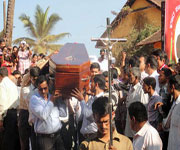 Papal Envoy to Ivory Coast and Indian Archbishop Rev Ambrose Madtha was laid to rest at the Holy Redeemer Church, Belthangady Southern India on December 15, Saturday following his death in a car crash. The accident occurred on December 8 in the Ivory Coast, his most recent appointment on behalf of The Vatican. Archbishop Madtha, who was 57 when he died, served as the Papal nuncio in six countries including Taiwan, Albania and the Ivory Coast. Some 3,500 people attended the funeral at the Holy Redeemer parish church in Beltanghady, Karnataka state, including a delegation from the Ivory Coast.


Archbishop Ambrose Madtha was considered a trusted peace-builder in many of the places in which he was posted. Imam Dosso, a Muslim leader in the Ivorian delegation, said Archbishop Madtha had built bridges between faiths, recalling an incident when he printed and distributed 120 copies of the Qu'ran after a Christian burned the Islamic holy book, sparking an outcry. "That is a great gesture … to sustain peace and cordiality. That is why I have come for the funeral," said Dosso.


In late 2010, he served as a behind-the-scenes broker when former Ivorian President Laurent Gbagbo tried to cling to power after losing an election. In Taiwan – his prior posting – Archbishop Madtha arranged for then President, Chen Shui-bian to attend the funeral of John Paul II. A leader of the diplomatically isolated island had never before visited The Vatican.


Apostolic Nuncio of India Archbishop Salvatore Pennacchio together with Archbishop Bernard Moras of Bangalore, Bishop Henry D'Souza of Bellary, Bishop Oswald Lewis of Jaipur and Monsignor Denis Moras Prabhu the Vicar General of the Diocese of Mangalore welcomed the minister and the ambassador to Mangalore.


The officials have come to Mangalore to attend the funeral of Archbishop Ambrose Madtha who was the Papal Nuncio to Ivory Coast at Belthangady, his native parish. He died of a road accident in Ivory Coast on December 8. He was travelling back from d'Odienne Diocese in Ivory Coast after a priestly ordination. The officials together with the Archbishops and Bishops prayed for the soul of the departed Apostolic Nuncio of Ivory Coast.