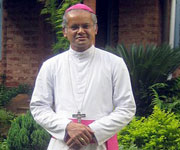 The funeral service of Archbishop Ambrose Madtha, the Papal Envoy to Ivory Coast who died in a road accident, will be held this Saturday in Mangalore, officials said. Father James D'souza, Parish Priest of the Holy Redeemer Church in Belthangady where the services would be conducted said that an 11-member delegation from Ivory Coast including its Foreign Minister and Church leaders are scheduled to arrive in Mangalore for the funeral services Archbishop Salvatore Pennacchio, Apostolic Nuncio to India and Nepal is also expected to be present at the funeral ceremony, the priest added. He said representatives of the Vatican are also expected to attend the services.


Archbishop Madtha died on the spot when his car collided with another vehicle while he was traveling back from the northwestern town of Odienne to an ordination ceremony in Ivory Coast on Dec. 8. He was born in 1955 to the late May and Joseph Madtha. He did his seminary studies in St Charles Seminary, Nagpur and obtained doctorate in Canon Law from Urban University in Rome. He was ordained a priest in 1982. He became the doyen of the Ivorian diplomatic corps after arriving in 2008.