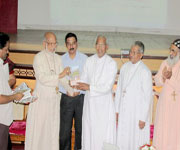 Cardinal George Alencherry, Major Archbishop of Syro-Malabar Church released the Malayalam translation of a book comprising 100 stories on Christian faith amid persecution in Kandhamal of Orissa State at the Kerala Catholic Council assembly in Kochi on December 11 and handed over the first copy of the book to Archbishop Andrews Thazhath, president of Kerala Catholic Bishops Council (KCBC). It is the Malayalam version of the 75,000 word book, Early Christians of 21st Century, by journalist Anto Akkara. Father Devassy Panthallookaran, Former Principal of St Thomas College in Thrissur, Kerala, translated it. Over 100 church leaders, including bishops, took part in the ceremony.


Cardinal Alencherry congratulated Akkara for bringing to the attention of the world the sufferings and unwavering faith of the persecuted Christians of Kandhamal, going beyond his role as a journalist. In his additional foreword to the book, the Cardinal described the book as "a testimonial for martyrs."


Archbishop Thazhath said that this is an inspiring book in the year of Faith. In his address, Akkara said that he has tried to document "truthfully their incredible faith, pains and sufferings in words and pictures." The Malayalam translation of the book is published by Veritas India Books, a publishing firm based in Thrissur.