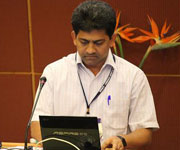 In a statement marking the Human Rights Day today, the Catholic Bishops' Conference of India's office for justice, peace and development called on the people to respect human dignity. "Respect for human rights is the secret of true peace," it said and affirmed that the culture of human rights cannot fail to be a culture of peace. "As we observe the day, we cannot miss or overlook the poignancy of the human rights situation in India," said Rev Dr Charles Irudayam, Secretary, CBCI Office for Justice, Peace and Development.


Rev Dr Charles Irudayam said that the people, who non-violently oppose nuclear power plants and uranium mines are greeted with atrocious and brutal attacks by the police, dangerous fabricated cases, curfew and prohibitory orders. When thousands of tribal villagers oppose government's move to dispossess them of their land and fields in favor of industrial projects, they are brutally attacked by "paid goons of the company," the priest added.


He said that according to the recent human rights report on India, glaring violations include starvation deaths of farmers, willful neglect of healthcare of poor, extra judicial killings, custodial torture, high incidence of violence against women, discrimination and growing atrocities against dalits and discrimination and targeting of religious minorities.


Father Irudayam reminded the people Pope John Paul II's message that "citizens have not only the right but also the responsibility to participate and that when they are prevented from exercising this responsibility, development of a sound democratic system then becomes practically impossible." The priest said that the Church document, Justice in the World, admitted that Church's "mission involves defending and promoting the dignity and fundamental rights of the human person." In short, the Church's defense of human rights is an inescapable requirement of her mission of justice and love in the spirit of the Gospel message, he added.