Christmas is more than a party says Pope 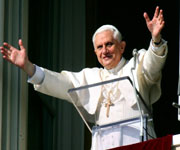 " In a consumerist society, where we seek joy in things, the Baptist teaches us to live in an essential way, so that Christmas is not only experienced as an outward party, but as the feast of the Son of God who came to bring peace, life and true joy to people". This was the focus of Benedict XVI's reflection before the Sunday Angelus with the pilgrims in St Peter's Square. May they be welcomed and have a dignified life! In preparation for Christmas time, may a joyous and fraternal solidarity come to aid their needs and support their hopes, says Pope.


Referring, as usual, to the Sunday Gospel (II Advent - C, Luke 3, 1-6), the Pope presented the figure of John the Baptist, the forerunner of Jesus. Citing his newly released book, "The Infancy of Jesus," the pontiff recalled: "all four Gospels place the figure of John the Baptist at the beginning of Jesus' ministry, as his precursor. St. Luke has further moved the connection between the two figures and their respective missions ... Already in their conception and birth, Jesus and John are brought into relation with each other "(The Infancy of Jesus, 23). This setting helps to understand that John, as the son of Zechariah and Elizabeth, both of priestly families, is not only the last of the prophets, but also represents the whole priesthood of the Old Covenant and therefore prepares men to spiritual worship of the New Covenant inaugurated by Jesus (cf. ibid. 27-28). Luke also dispels a mythical reading that is often made of the Gospels and historically contextualizes".


"Luke - he added - also dispels an often mythical interpretation of the Gospels and historically contextualizes the life of John the Baptist: "In the fifteenth year of Tiberius Caesar, when Pontius Pilate was governor ... during the high priesthood of Annas and Caiaphas" (Lk 3, 1-2). Within this historical framework lies the true great event, the birth of Christ, which his contemporaries will not even notice. By God the great men of history form the backdrop to small! ". Yesterday, speaking of the Annunciation to Mary, Benedict XVI pointed out that it took place in silence. It was "an event that, if it happened in our time, would not have left any trace in newspapers and magazines, it is a mystery that happened in silence. What is truly great often goes unnoticed".


"John the Baptist - he continued - is defined as the "voice of one crying in the desert: Prepare the way of the Lord, make straight his paths" (Lk 3:4). The voice proclaims the word, but in this case the Word of God, as it comes down to John the son of Zacharias in the wilderness (cf. Lk 3:2). Thus he plays an important role, but always in relation to Christ. St. Augustine says: "John is the voice. Instead of the Lord says: "In the beginning was the Word" (John 1:1). John is the voice that passes away, Christ is the eternal Word who was in the beginning. If you take the word away from the voice, what is left? A faint sound. The voice without the word strikes the hearing, but does not build up the heart"(Sermon 293, 3). Our aim today is to listen to that voice, to give space and welcome Jesus, the Word that saves us, to our hearts. In this time of Advent, let us prepare to see, with the eyes of faith, God's salvation in the humble stable in Bethlehem (cf. Lk 3:6)".


"We entrust our journey towards the Lord - he concluded - to the maternal intercession of Mary, Virgin of Advent, so we may be ready to welcome, into our hearts and life, Emmanuel, God-with-us". After the Marian prayer, greeting the French-speaking pilgrims, Benedict XVI, was inspired by the season of Advent as a "journey" towards the Lord, to also remember the plight of migrants: " This reality is very familiar to people forced to leave their region, for various reasons, including war or poverty. Migrants are aware of the precarious nature of their situation and often encounter little understanding. May they be welcomed and have a dignified life! In preparation for Christmas time, may a joyous and fraternal solidarity come to aid their needs and support their hopes!".
Source Asia News.