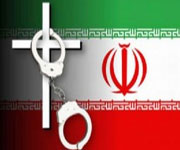 According to Mohabat News, it is now 10 months since a number of Christian converts were arrested in Shiraz. Five of those arrested were tried on Monday, October 15, 2012, at branch 3 of the Revolutionary Court in Shiraz. The trial was judged by Mr. Rashidi who finished the court session without issuing any specific verdict. The five Christians, Mojtaba Hosseini, Mohammad-Reza Partoei, Vahid Hakkani, Homayoun Shokouhi, and his wife Fariba Nazemian, are still being held in prison, awaiting a decision to be made for them by the authorities.


Quoting some judicial authorities, the families of these Christians were told that no bail would be accepted to secure their temporary release. Also, a report received by Mohabat News indicates that some seven or eight Christian prisoners in Adel-Abad prison were transferred to a newly built ward called, "the edification ward". This ward is the least equipped ward in the prison. The ward does not even have a heating or air conditioning system, and as winter approaches its washrooms are in an inappropriate condition.


There are reportedly four non-Trinitarian Christians among those being held in Adel-Abad prison. The non-Trinitarian Christians (also known as Branhamists) were arrested on October 12, 2012, following an attack by the security authorities in Shiraz. It is said that the "edification ward" is used to keep prisoners who are charged with the same offense. On the other hand, after ten months in prison and going through numerous interrogation sessions, the prison authorities still summon these Christian prisoners from time to time, and order them not to express their thoughts, especially their Christian faith, under any circumstances.


Although no legal procedure was followed in handling these Christians' case, the Iranian judicial authorities have announced their accusations as follows, "creating illegal groups, participating in house church services, propagating against the Islamic regime and desecrating Islamic holy figures through evangelism."
Source Christian News Today