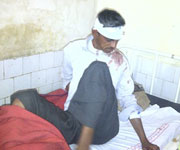 "Police in Madhya Pradesh is complicit in the violence against the Christian community", denounces Sajan K George, President of the Global Council of Indian Christians (GCIC), in the latest case of persecution in the state. About 20 members of the Rashtriya Sawayamsevak Sangh (RSS) have made false allegations of forced conversions against some Pentecostal Christians in the district of Ratlam. One of the pastors present was beaten up by activists RSS and rushed to hospital. The incident occurred on November 30.


A week ago, the Rev. Govind, pastor of the Gospel Church, called on the Rev. Sarath to take part in a prayer meeting in the village Boothpada. Shortly after the beginning of the meeting, four police officers arrived on the spot and ordered those present to stop and leave. Then, some twenty Hindu nationalists of the RSS appeared and threatened religious and faithful with insults. The pastors Govind and Sarath fled on a motorcycle, but the attackers chased them, stopped and beat them. Rev. Sarath was seriously injured in his head, face and other parts of the body, and only thanks to the intervention of some members was brought to the nearest hospital.


At first, the police prevented the Christians at the rally from helping the pastors to flee from the Hindu nationalists, because "nothing would happen to them." According to Sajan George, thanks to the anti-conversion law, which exists in Madhya Pradesh (Freedom of Religion Act, 1968) "Hindu nationalists manipulate the police, pushing them to act against the Christians" On paper, these laws prohibit conversions that occur "through force, coercion or fraud," and thus allow the government to investigate. In reality, they are applied only in cases of Hindus who switch to another religion. Since its implementation, conversions have decreased.