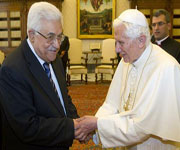 The Palestinian President, Mahmoud Abbas has met with Pope Benedict XVI and expressed gratitude for the Vatican's public stand in favor of a Palestinian representation at the United Nations. Md. Abbas talked privately with Benedict for 25 minutes Monday and he subsequently went on to meet with Cardinal Secretary of State Tarcisio Bertone accompanied by Archbishop Dominique Mamberti, Secretary for Relations with States. Abbas gave Benedict a mosaic of the church of the Holy Sepulchre in Jerusalem, with the inscription saying it was presented by the "President of the state of Palestine."


In a press release Monday, the Holy See's Press Office said "the cordial discussions made reference to the recent Resolution approved by the General Assembly of the United Nations by which Palestine was recognised as a Non-member Observer State of the aforementioned Organisation. It is hoped that this initiative will encourage the commitment of the international community to finding a fair and lasting solution to the Israeli-Palestinian conflict, which may be reached only by resuming negotiations between the Parties, in good faith and according due respect to the rights of both."


After the UN's General Assembly voted to grant the Palestinian Authority the status of a non-observer member state, the Holy See issued a statement welcoming the decision and quoting Pope Benedict's earlier remark that the "the Palestinian people have a right to a sovereign independent homeland."