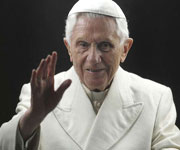 Pope Benedict XVI on Saturday expressed his closeness to the people of the Philippines who have been hit in recent days by a violent storm. The Holy Father prayed for the victims, for their families and for the many who have been displaced. He also prayed that their faith would give them the strength to face, what he called, "this difficult trial." The Pope was speaking from the Papal Apartments above St Peter's Square after the Angelus prayer on the Feast of the Immaculate Conception


"Today, with joyful hearts, we celebrate the Immaculate Conception of the Blessed Virgin Mary. Through her powerful intercession, may the Lord grant us the grace to reject sin and persevere in the grace of baptism." The Holy Father described Mary as a genuine expression of grace and he went on to say that the light that emanates from the figure of Mary helps us to understand the true meaning of original sin.


The Pope explained that in Mary, God demonstrates that sin is broken. Between the two there is full communion and full agreement. Mary has no sin because she all to God, she has totally emptied herself for him and is full of his grace and his love.


The Pope concluded by saying that the doctrine of the Immaculate Conception of Mary expresses the certainty of faith that God's promises have been fulfilled: that through Mary comes the blessed fruit of the whole ' universe, Jesus the Saviour.


The Holy Father also reminded the faithful gathered for the Angelus that he would be making his traditional visit to the Spanish Steps in Rome on Saturday afternoon, to pay homage to Mary Immaculate. Listen to Lydia O'Kane's report.
Source Vatican Radio.