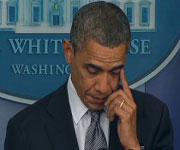 At least 27 people, including 20 children, were killed Friday when a gunman clad in black military gear opened fire inside Sandy Hook Elementary School in Newtown, Conn. It appears to be the nation's second-deadliest school shooting, exceeded only by the Virginia Tech massacre in 2007. The local news outlets reported that the shooting occurred inside a kindergarten classroom and that all the children in that classroom are unaccounted for. An official said the shooter, who had ties to the school, was armed with a rifle; a motive is not yet known. Connecticut State Police Lt. Paul Vance said police arrived at the scene "within minutes" of a 911 call placed shortly after 9:30 a.m.


The White House said President Barack Obama was notified of the shooting around 10:30 a.m. The elementary school, which is located about 45 miles southwest of Hartford and 60 miles northeast of New York City, has close to 700 students.


A vigil and memorial service has been held for victims of a shooting at an elementary school. According to the reports, the gunman has been widely identified as Adam Lanza, 20, who apparently took his own life at the scene. It is believed that Lanza killed his mother, a teacher, earlier. Six adults were also killed in the attack, the third major gun attack in the US this year. Earlier in the year, 12 people were killed at a Batman premiere in Aurora, Colorado, and in August, six people died at a Sikh temple in Wisconsin.


President of United States, Barack Obama said he was praying for the victims and quoted from Scripture, saying he hoped God would "bind the broken hearted and heal up their words". "As a country we have been through this too many times," he said. "We're going to have to come together and take meaningful action to prevent more tragedies like this, regardless of the politics." He offered his condolences to families of the victims. "Our hearts are broken today, for the parents, grandparents, sisters and brothers of these children, and for the families of the adults who were lost," he said.


Pope Benedict XVI said "The Holy Father was promptly informed of the shooting at Sandy Hook Elementary School in Newtown and he has asked me to convey his heartfelt grief and the assurance of this closeness in prayer to the victims and their families, and to all affected by the shocking event. In the aftermath of this senseless tragedy he asks God, our Father, to console all those who mourn and to sustain the entire community with the spiritual strength which triumphs over violence by the power of forgiveness, hope and reconciling love."


Local pastor Rocky Veach told "I think it's indicative of the condition of our culture in this nation that this kind of thing continues to happen. "As a pastor, I think we have to look to the Lord. A lot of people are hurting today and it's very sad when you have to ask God for his help to comfort them, and not only for the healing but just for answers as to why this kind of thing continues to happen."