Pope Benedict XVI turns to twitter to speak to the world 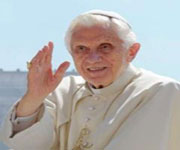 Anyone who says the Church is irrelevant needs only look at the Pope who has managed to rack up nearly half a million Twitter followers without even making a single tweet. The Pope will make his Twitter debut as @Pontifex on 12 December but the page is already live and at the last count had 526,341 followers. The 85-year-old head of the Roman Catholic Church Benedict XVI already has around 1.2 billion followers around the world.


It's not likely he'll be using Twitter to share what he had for breakfast, but rather to impart some spiritual wisdom to help his followers understand God and the world they live in. Senior media adviser to the Vatican, Greg Burke, said the Pope would also be personally answering questions sent to him via the hashtag #askpontifex.


"All the Pope's tweets are the Pope's words. Nobody is going to be putting words into his mouth," he said. The tweets will be translated into several languages, including Spanish, English, Polish and Arabic.


Burke added: "This is the new market of ideas and the Church has to be there. We want to use any method to spread the message. It's cost-effective and not very labour intensive and it is aimed at young people."