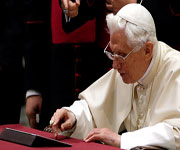 Only five days have passed since Pope Benedict XVI sent out his first Tweet in eight languages and according to the Pontifical Council for Social Communications; his @Pontifex handle has surpassed two million subscribers. President of the Council, Archbishop Claudio Maria Celli told Vatican Radio the Pope is tweeting because that's what people are doing today and he wants to be present in the latest platforms of communication to share with them "words of truth."


That means adapting his messages to fit into Twitter's 140 character format. But the key, Archbishop Celli notes, "is not so much the number of characters available but the depth of the words he uses." The Archbishop also says we could all stand to re-learn how to communicate using words "that always have a profound significance for others."


Monsignor Claudio Maria Celli points out that 140 million people actively use Twitter and forty percent of them are young people from 18 to 34 years of age. Pope Benedict wants to be there in the dialogue with them, he says. The Pope and the Church, Celli says, want to be where men and women are speaking together because not only are they sharing information, they're also sharing a bit of themselves. And, he notes the Church must do all it can to bridge the "digital divide" in Africa and certain areas of Latin America and Asia where access to social media is greatly limited.