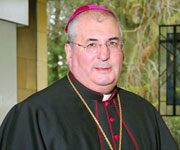 The Church of Scotland and Catholic Church in Scotland have spoken out against the Scottish Government's plans to legalise gay marriage. The Scottish Government this week published draft legislation to change the law on marriage. Under the draft bill, religious bodies would have to "opt in" to perform same-sex marriages. In its response, the Church of Scotland repeated its opposition to same-sex marriage.


The Reverend Alan Hamilton, Convener of the Church of Scotland's Legal Questions Committee said: "Unless our General Assembly decides otherwise, we cannot support the Government's proposals on celebrating civil partnerships or same sex marriage." "We have also expressed concerns about the speed with which the Government is proceeding with this and what we fear will be inadequate safeguards for religious bodies and ministers and people of faith who view this as being contrary to their beliefs."


Archbishop Philip Tartaglia, the President of the Bishops' Conference of Scotland has urged the widest possible protection of civil liberties for those who oppose gay marriage. "In order not to discriminate unjustly, more safeguards need to be embedded in the proposed legislation." He said that laws on employment, equality and education should be reviewed and amended if necessary to avoid "unjust penalisation" of anyone who disagrees with same-sex marriage. "The Catholic Church has made its view very clear that the redefinition of marriage is unwise and unnecessary," he said.


"The Catholic bishops of Scotland are entirely at one with their colleagues in England & Wales in upholding marriage as a union uniquely of a man and a woman for mutual love and support and open to procreation." He warned that legislation to allow gay marriage was "likely to have far reaching consequences which will impact far beyond the small number of people who may wish to avail themselves of the new provision".