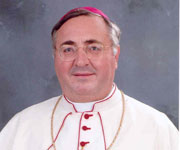 A statue of Pope John Paul II was unveiled in Gonsalo Garcia church at Barampur in Vasai (W) in North Mumbai, Maharashtra State of India by the Vatican Ambassador to India and Nepal, Archbishop Salvatore Pennacchio, Titular Archbishop of Montemarano. The late Pope had visited the shrine 26 years ago. Last year, the Vasai diocese had celebrated the silver jubilee of Pope John Paul II visit to Vasai.


The Archbishop said that Vasai residents were blessed to have had the opportunity to welcome Pope John Paul II in 1986. A large crowd had gathered as Archbishop Pennacchio offered an English mass in the evening at the church. The Archbishop conducted services on Sunday at the St Peter's school ground at Arnala in Virar and then head for Talasari on Monday. On Saturday, the Archbishop visited various Catholic institutions and met delegates from organizations in Vasai.


Saint Gonsalo Garcia (1556–1597), the First Roman Catholic Saint from India was born in the above said Vasai, he preached from the Bassein fort during the time the town was under Portuguese colonial rule.